Photoresponsive Modulation of a Freshwater Phytoplankton Community by Bacterial Lipopeptides

Small molecule-mediated interactions of freshwater organisms are barely investigated with respect to their ecological impacts. In this project, the role of siderophores in structuring planktonic communities will be analyzed. Recent evidence suggests that some freshwater bacteria have acquired pathways for the biosynthesis of photoreactive Fe(III) ligands. Such compounds were before only known from marine bacteria, and they had been linked to the redox cycling of iron in the oceans. When exposed to sunlight, the iron complexes of these siderophores rapidly undergo an oxidative decomposition. At the same time, the coordinated ferric iron is reduced via ligand-to-metal charge transfer. The temporary increase of the Fe(II) concentration in the vicinity of the siderophore-producing bacteria promotes the assimilation of iron by associated algae. These planktonic consortia include many phototrophs, which are themselves not capable of siderophore-mediated iron uptake, but require large amounts of the transient metal to support the fixation of carbon. Even though preliminary studies confirmed the growth-stimulating effect of photoreactive siderophores on marine microalgae and fueled the idea of a “carbon-for-iron” paradigm that would also be advantageous for the bacterial producers, many aspects of this mutualistic interaction are still poorly understood. In particular, we plan to resolve the discriminatory effects of photoreactive siderophores on a heterogeneous plankton community. Its members include both siderophore producers, such as cyanobacteria, and non-producers, among them many eukaryotic algae and protists. 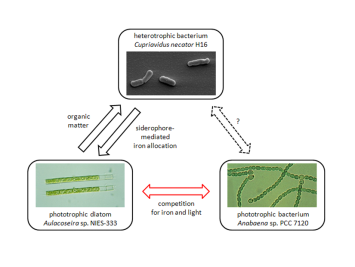 Expected siderophore-mediated interactions of the bacterium Cupriavidus necator H16 with photoactive microorganisms in a freshwater ecosystem.

While the latter groups likely benefit from a facilitated access to iron, the former might encounter the opposite situation as they forfeit their advantage of endogenous siderophore biosynthesis. It is therefore assumed that the bacterial release of photoreactive Fe(III) ligands induces a shift in the composition of a planktonic consortium away from prokaryotic siderophore producers. Together with the groups of Pohnert (C01), Mittag and Sasso (A02), who provide the required expertise for the co-cultivation and analysis of eukaryotic algae, we will assess this impact, which may help us delineate new strategies for the biological control of harmful algal blooms in rivers and lakes. To this end, we will also evaluate the application of new delivery systems for siderophores, which are developed by the Schubert group (B04). Furthermore, we set out to clarify whether bacterial siderophore biosynthesis responds to signals from eukaryotic microalgae. The concomitant communication could rely on chemical molecules or, alternatively, on direct physical contact between the partners. Both scenarios will be probed by determining levels of bacterial gene expression in the presence and absence of diatoms or their culture extracts. We expect this experiment to provide fundamental insights into the evolution of natural product-mediated trans-kingdom interactions. Finally, we will validate the generalizability of mutualistic iron sharing between heterotrophic bacteria and diatoms. For this purpose, we will analyze the genome sequences from selected freshwater bacteria, exploiting the predictability of microbial siderophore biosynthesis. The products of cryptic pathways will be isolated and characterized in collaboration with the groups of Plass and Wichard (C05) using a new metallophore typing technique.