The digestive tract of most insects harbors a rich and complex microbial community, typically 107 – 109 prokaryotic cells, outnumbering the host’s own cells in most cases. The gut allows the host to exploit their metabolic and catabolic capabilities to degrade and digest complex organic matter. To understand the symbiotic interaction of microbes with the insect host, we have to identify participating microorganisms and elucidate how their composition is controlled. Culture independent technologies have provided first insight into the stability and variability of gut communities from a polyphagous, e.g. Spodoptora littoralis or a specialist insect, such as Manduca sexta. According to recent metagenomic analyses their microbiomes are composed of a core community along with bacteria from their food plants. A strong dependence of the composition of the gut community on the insect’s developmental stage suggests that unknown factors contribute or even govern the symbiotic interaction between the partners. In early instars of S. littoralis Enterococcus spp. dominate, while in the late instars Clostridia significantly contribute (ca. 50%) to the microbial population. Such observations support unknown mechanisms by which the insect host is able to influence the gut microbiome to maintain optimal symbiotic interactions. The gut of S. littoralis and some other lepidopterans contains large amounts of the iron-chelator 8-hydroxyquinoline-2-carboxylic acid (8-HQA). The compound is biosynthesized and secreted by the insect and may act as a natural metal-binding chelator that affects the iron-availability thereby controlling microbial growth. In addition, still unknown compounds in the gut fluid stimulate growing cultures of Clostridia to secrete large quantities of novel proteins into the culture broth. Other microbes may respond similarly under the impact of products from competing microbes, or host- and (partially digested) food-derived compounds. 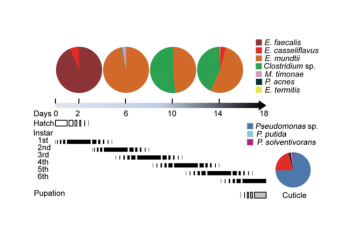 To elucidate the mechanisms that control the gut microbiome, we will block the insect’s ability to produce the iron-chelator 8-HQA by inhibitors or by silencing techniques (RNAi) followed by diversity analyses of the microbiome. Using growing cultures of Clostridia and other dominant bacteria we will study the impact of larval secretions to elucidate which compounds reprogram the microorganisms to produce new proteins and metabolites. The response of the model microbes will be characterized using elaborate LC/MS for comparative proteomics and metabolomics with a broad coverage. We will use transgenic, fluorescent Enterococcus mundtii cells and establish them as members of the gut microbiome. Recovery of the labeled bacteria from defined areas of the foregut, midgut and hindgut of the insect, will allow to determine their adaptation to the host by single-cell transcriptomics. The approach can be used to follow the complete development of the insect from the larval stage through metamorphosis to the adult insect. These approaches will be complemented with pH-sensitive macromolecular delivery systems for Fe(II) or inhibitors to study the impact of a controlled release of iron on the local microbial community. Taken together, these analyses will identify insect-derived and/or microbial products that control the composition of the gut microbiome from freshly hatched larvae to the adult stage of S. littoralis. 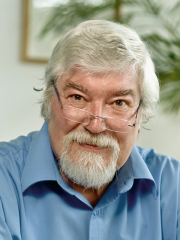