The chemical communication between microorganisms is one of the emerging fields in microbiology and chemical biology. It depends on natural products (NPs) that are assembled by enzymes encoded in distinct gene clusters. Many of these gene clusters are silent under conventional laboratory conditions and only expressed in a specific ecological context, for example in soil or aquatic microbial communities. The impact of surrounding microorganisms on the activation of silent NP gene clusters and the feed-back activity of the produced compounds on the inducing microorganisms are the major questions addressed in project B02. In preliminary work we discovered an unprecedented tripartite interkingdom microbial consortium consisting of the bacterium Streptomyces rapamycinicus (or S. iranensis), the fungus Aspergillus nidulans and the green alga Chlamydomonas reinhardtii. The streptomycete triggers the expression of the otherwise silent ors gene cluster of A. nidulans that results in the production of orsellinic acid and derivatives by re-programming the epigenetic machinery of the fungus. Key fungal responsive genes encode the histone acetyl transferase GcnE that specifically acetylates histone H3 amino acids K9 and K14 located in the ors gene promoters, as well as the counter-acting histone deacetylase SirE and the transcription factor BasR. We also elucidated the key chemical mediator of this tripartite consortium: the NP azalomycin F, produced by the streptomycete. Azalomycin F belongs to a family of polyketides that start their biosynthesis with arginine. All tested members of this family were found to induce fungal NP formation, both in Aspergillus and Penicillium species. Furthermore, sublethal concentrations of azalomycin F trigger generation of gloeocapsoids, a protective multicellular structure, by C. reinhardtii (Figure). 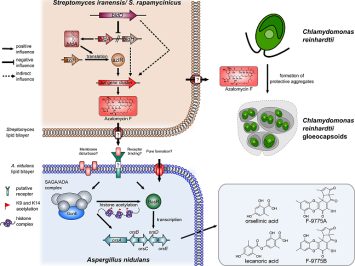 The specific interaction between A. nidulans and S. iranensis provides an excellent model system to answer the fundamental question how chemical mediators produced by bacteria can manipulate fungi (eukaryotes) by re-programming their epigenetic machinery. Further, we gain the opportunity to understand the principles how chemical mediators of a certain family shape the interaction of microorganisms, which other compounds fine-tune the system and how interaction responses look like. We will analyze the system on the three levels, i.e., the bacterial inducer and also receiver of signals S. iranensis, the fungal partner A. nidulans and aspects on the ecological interactions including C. reinhardtii. Specifically, we will elucidate (i) the targeted release of azalomycin F from S. iranensis towards A. nidulans and C. reinhardtii, as well as (ii) the mechanism underlying activation of fungal ors genes by bacterial arginine-derived polyketides and, (iii) identify chemical mediators that trigger azalomycin F release and attract C. reinhardtii to A. nidulans. Our findings can be expected to provide generally valid insight how chemical mediators determine functional ecological interactions of microorganisms both at the cell and molecular level. 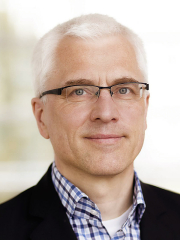 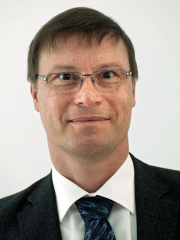 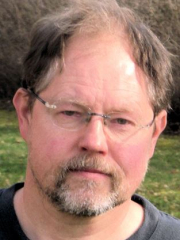 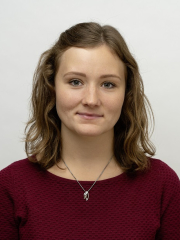