Unicellular eukaryotes are a widespread group in aquatic ecosystems that can infect phytoplankton and contribute to the bloom termination. These microorganisms establish associations with the algal host to create a biomolecular network, also referred to as the algal holobiont. In most host-parasite interactions, chemical mediators and signaling cues promote the disease or endorse the algal defense. The performance of the individual cells within a community will determine the outcome of species successions on a large scale. Little is known about the occurrence of these signals in natural populations across different spatial-temporal scales.

We study the single-celled parasites, such as the oomycete Lagenisma and the alveolate Parvilucifera, which rely on algal hosts to have sex and disseminate into the ecosystem. These parasites significantly influence the aquatic ecosystems and food web by controlling algal populations and terminating harmful blooms. In the framework of the CRC ChemBioSys (SFB 1127), we have investigated the interplay of the diatoms Coscinodiscus and parasite killer Lagenisma. We found that the parasitic symbiont hijacks the host metabolism to overexpress infection mediators β-carbolines. We also study toxic dinoflagellates as host models that can be killed by the generalist eukaryotic parasites Parvilucifera and Amoebophrya. We aim to identify the substances involved in these algae-parasites interactions, and further decipher the host defense strategies and associated metabolism. We will expand the range of parasite infection strategies to other algae, and study the parasite virulence in multipartite interactions and natural populations. 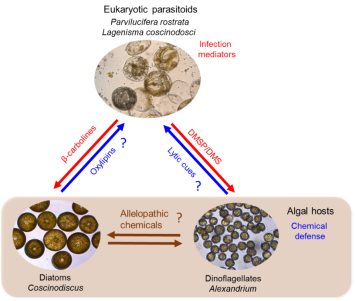 Outline inter-kingdom and intraspecific interactions governed by chemical mediators between eukaryotic parasites co-occurring in the same habitat and their algae hosts and the associated microbial community. The infochemicals mediating host defense and parasite pathogenesis are highlighted in between the interacting partners

Our goals are a) deciphering the infection and defense strategies of the symbiotic microbes, b) revealing the individual responses within the communities using single-cell analytics, and c) monitor the mediators and the host-parasite dynamics across spatial-temporal scales within algal communities. Furthermore, we will study the parasite fitness in the presence of other coexisting members of the plankton communities, such as the lytic bacterium Kordia algicida and its algal host (C01). We will expand the range of parasite infection strategies to other algae, such as the marine algal model Chlamydomonas sp. (A02). Oxylipins connected to host resistance in microalgae will be investigated (A04). We will elucidate metabolism genes associated with algal resistance against parasites using transcriptomics (B02). A natural product database based on single-cell analytics will be created and implemented in existing open repositories (INF). This joint approach will provide insight into fundamental mechanisms related to infection and control processes in algal communities and mediators that facilitate marine parasitism and host defense. 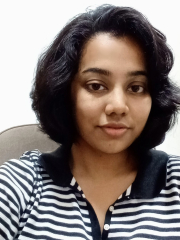