Symbiotic microorganisms play fundamental roles for the ecology and evolution of most animals, including humans. However, the chemical mediators that shape and structure the composition of host-associated symbiotic communities remain poorly understood, despite their importance in biological systems and their potential value for targeted microbiota manipulation in agriculture and medicine. Insects present experimentally tractable systems with limited complexity in their associated microbiomes that enable the functional characterization of key metabolites and their impact on microbial community composition. Here we aim to exploit a multipartite symbiosis in beetles to elucidate the impact of bioactive secondary metabolites on the composition and functionality of a protective microbial community. Female darkling beetles of the agricultural pest species Lagria villosa carry multiple strains of Burkholderia gladioli as well as a community of other bacteria in specialized organs and transmit them vertically to their offspring via the egg surface, but they can also acquire bacteria horizontally from the environment (Figure). On the egg surface and after colonizing the developing larva, the bacterial symbionts produce bioactive secondary metabolites, providing protection to these vulnerable life-stages against pathogenic fungi. However, the factors structuring the symbiotic community and the role of the individual metabolites in determining both the outcome of symbiont-symbiont interactions and the defensive function for the host remain unknown. 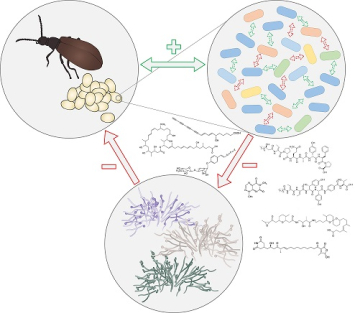 Interactions in the defensive Lagria symbiosis

We have established techniques for rearing and experimental manipulation of two Lagria species and several of their bacterial symbionts. Additionally, we have characterized eight bioactive secondary metabolites produced by the Burkholderia symbionts in collaboration with B01, Hertweck, and generated knockout mutants for the underlying biosynthetic gene clusters. Furthermore, in vitro assays provide preliminary evidence for an impact of co-cultivated strains and their bioactive secondary metabolites on the growth of the different symbionts. In this project, we will utilize the experimentally and genetically tractable Lagria symbiosis as a model to 1) investigate the dynamics of competition and facilitation among symbiont strains in vitro and after experimental inoculation into the host, 2) assess the impact of secondary metabolites on establishment and composition of the symbiotic community, 3) characterize secondary metabolites produced by the non-Burkholderia members of the symbiotic community in close collaboration with B01, Hertweck, and 4) elucidate the effect of symbiont strain composition and their secondary metabolites on the protective benefit for the host. While bioactive chemicals produced by defensive symbionts have been identified across several defensive mutualisms, evidence for the ecological relevance of individual compounds and their importance for protecting the host and shaping the symbiotic community remains lacking. This knowledge will not only advance our understanding of the fundamental processes underlying microbiota assembly but also provides the foundation for targeted manipulation of microbial communities associated with organisms of agricultural and medical interest, including crop plants, livestock, and humans. 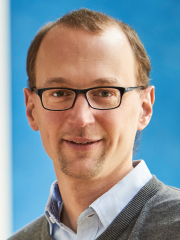 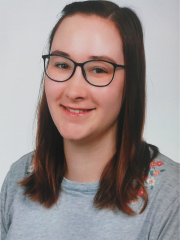