Discovery of Chemical Mediators and their Targets

Partners in this area have the task to discover chemical mediators that function specifically in a community context. Obviously, single species of unicellular organisms such as bacteria and microalgae communicate by using quorum-sensing type chemicals as well as pheromones. We also know that allelochemicals released in the presence of, e.g. a co-cultivation partner can enable the producer to perform better. However, mediators that affect the entire consortia and that are released in consortium-specific situations are poorly understood, especially at a chemical level. Project area A now aims to discover and elucidate metabolites and their corresponding genes that act specifically in communities. 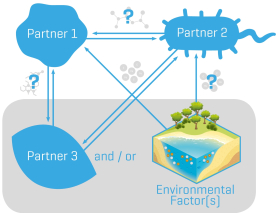 Thallusin Function, Homeostasis, and Metabolism in Cross-kingdom Interactions of Ulva (Chlorophyta) and its Associated Bacteria

The project aims to understand the chemical-mediated cross-kingdom interactions between the marine green algae Ulva mutabilis and the associated bacteria. The bacteria release morphogens such as Thallusin which induce various algal developmental processes. Thallusin derivatives will be synthesized to investigate their quantitative structure-activity relationships and to localize thallusin by imaging techniques in Ulva. The goal is to identify the key genes and metabolites by comparative transcriptome and metabolome analysis in thallusin homeostasis. Hereby, the project also focuses on the importance of thallusin for economically relevant algal aquaculture.

Albeit microalgae are key contributors to global carbon fixation, their interactions with other microbes in terrestrial and marine ecosystems are barely known. We found that the soil bacterium Pseudomonas protegens arrests the growth of the green soil alga Chlamydomonas reinhardtii, deflagellates it and alters its morphology by using an arsenal of bacterial chemical weapons; the most potent toxins are a cyclic lipopep-tide and a polyyne. We also identified abiotic and biotic factors shaping this interaction. We now aim to further study the involved regulatory mechanisms and to compare those with a marine Chlamydomonas- based model system. This knowledge is relevant for primary production and for the control of algal blooms.

The root-colonizing fungi Piriformospora indica (Pi) und Mortierella hyalina (Mh) promote the fitness of plants. We study perception and early Ca2+-dependent signaling steps in Arabidopsis roots which are induced by the chemical mediators cellotriose from Pi, short-chain cello-oligomers, and a furan from Mh, which inform the plants about changes in their cell walls and the rhizosphere. Furthermore, the role of a S-containing volatile released by Mh and of a N2-fixing bacterium in Mh will be studied in the tripartite plant-fungus-bacterium interaction.

We investigate how functionally different M1 and M2 macrophage phenotypes communicate with each other to combat microbial infections and to restore tissue homeostasis in the host. We focus on lipid mediators as signal molecules that are formed by microbial exotoxins in macrophages and thus control phagocytes and other immune cells in the defense against infection. We evaluate if the targeted manipulation of lipid mediators with active ingredients, especially natural products from other organisms, can be used to modulate cellular host functions in such a way that microbial infections are effectively combated and that homeostasis is restored.

This project analyses the biochemical and natural product repertoire of Termitomyces the fungal cultivar of the farming termite Macrotermes natalensis to elucidate (a) which terpenoids might serve as cross-kingdom communication signals within the complex multipartite symbiosis, and (b) which oxidative degradation mechanisms are employed by Termitomyces to fend of predators or parasites and detoxify plant metabolites. This CRC project will unravel the general mechanisms that allowed the termite-fungus symbiosis to remain stable over millions of years and by this will provide unique insights into sustainability of monocultures.

Aquatic phototrophic communities, consisting of algae and their associated bacteria, are responsible for most of the global oxygen production and nearly half of the global carbon fixation. Chemical mediators play crucial, but poorly understood roles, in establishing and maintaining these communities. While focusing on the abundant Planctomycetes bacteria, we identified the first chemical mediator from this phylum. Here, we will investigate how this mediator affects the formation of the bacterial community around it. In addition, we will uncover novel chemical mediators from Planctomycetes relevant in other phototrophic aquatic communities and thereby provide deeper understanding about the algal microbiome.